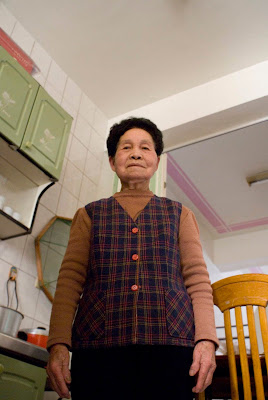 In Tainan, I met Peichi’s grandmother for the second time.  “Amma” is “grandma” in Taiwanese, which is exclusively spoken in most of southern Taiwan.  It is far different than Mandarin Chinese, sounding a lot like Thai would if it weren’t nasal.  Short staccato sounds punctuate each word.  Peichi and her immediate family of origin speak both languages fluently.  I don’t.  I barely speak some Mandarin, but know only a couple of Taiwanese words.  I have very few occasions to speak it at all.  Amma speaks no English and very little Mandarin.  This means that we cannot communicate at all without someone interpreting.  I often say, “Two people can always communicate if they want to badly enough.”  Amma is a slightly different story.  In some ways it doesn’t seem that she recognizes that I am not developmentally disabled, but just speak a different language.  I’m not saying she isn’t bright.  She is Peichi’s stock.  She must be.  She is just from a world that is much smaller than mine in some ways, and the idea of what happens so far away must be unimaginable to her.

The occasion of our first meeting was at Peichi’s and my engagement party in Taipei.  She came in and sat down at our head table as part of the bride’s family.  She is an adorable old lady.  She is only slightly above four feet tall, if even that much, and she looks exactly like you would picture an Asian “amma” should look like.  Just looking at her makes me want to simultaneously bear-hug her and show her great, gentle reverence.

She plopped down right next to me, with her purse set behind her on the chair, the way some Asian ladies do, both to prevent someone from stealing it and so as to not forget it is there.  It seemed to me at the time, that was probably not quite the most appropriate for the situation, and thought I would endear myself to her by being helpful.  Big mistake.

I patted her on the shoulder, smiled, and reached for her purse to hang it from the trestle on the chair back.  Her eyes grew wide and she reached for it as well, holding it in a death grip.  We played a brief game of tug-of-war as I tried to calm her.  I lost.  The purse was returned to its location.

It was a busy evening, and I was never able to revisit the situation with her.  But somehow I am sure that she was convinced I was trying to steal her, Peichi’s Amma’s purse at my own engagement party.  She must have been thinking that all of the rumors about these Americans must be true.  We are all uncouth charlatans and thieves.